Every disease has a story to tell – Dr. Travis Brown

This Pathological Life podcast is an inspired collaboration between General Pathologist Dr. Travis Brown and seasoned radio interviewer and podcaster, Steve Davis. By using a storytelling format, they share the history behind diseases and put health challenges into context to deepen your library of anecdotes and explanations.

One of the important jobs of a doctor is to prescribe medications.

Unfortunately, it also happens to be one of the most challenging.

Pharmacokinetics, physiology, and drug-to-drug interactions are just some of the challenges that doctors deal with every day.

It is becoming more apparent that for medications and one size (dose) does not fit them all. In addition, it the role of genetics is also becoming increasingly important for the drugs that suit, and don’t suit, individual patients.

Our special guest for this episode is Professor Graeme Suthers to help us shed light on this area of Pharmacogenetics.

Prof Suthers is Sonic Healthcare’ Director of Genetics. He is one of Australia’s most respected experts in the field of genetics, and is nationally and internationally recognised for his expertise in genetic disorders, testing and clinical service provision.

S2E44: Ep 44 Will not have been meaningless | PKU & Cystic Fibrosis Pathology

In the 1920’s, Pearl Buck searched for an answer to her 3 year old daughters intellectually disability.

Unfortunately, no-one could help her because her daughter’s condition was not yet known.

From the mid 1930s to the 1960s, a remarkable sequence of events led to the discovery of Phenylketonuria (PKU), accurate testing and widespread screening that revolutionised early detection of childhood disease(s)

It was also around the same time (mid 1930s) that some young children were believed to be dying of Coeliac disease. One child had an unusual findings in their pancreas.

Further investigation revealed other children with the same finding.

This was not Coeliac disease, it was Cystic Fibrosis (of the pancreas). As more was learnt about this disease, children began to live longer with improved quality of life.

Over the span of 90 years, the average life expectance for a person with Cystic Fibrosis went from 6 months to close to 50 years.

Our special guest for this episode is Professor Graeme Suthers.

NB. The voice of Pearl Buck was generously recorded by Christine Helen Coombe. We appreciate all submissions via our social media request.

Prof Suthers is Sonic Healthcare’ Director of Genetics. He is one of Australia’s most respected experts in the field of genetics, and is nationally and internationally recognised for his expertise in genetic disorders, testing and clinical service provision.

The computing world has come a long way in less than 100 years.

Since Alan Turing introduced his paper ‘Computing Machinery and Intelligence’ in 1950, we have not only achieved the ‘Turing Test’ of Artificial Intelligence, but exceeded it.

This episode takes a look at Digital Pathology and the prospects of Artificial Intelligence particularly in relation to Anatomical Pathology.

Dr. Joseph Anderson, the hostof Digital Pathology Today, is a consultant to early stage and mature companies in the digital pathology and molecular diagnostics space.

Previously, he oversaw the clinical pathology group at Genomic Health as the Oncotype Dx Breast Cancer Assay grew to a volume of over half a million tests. He was also involved in the development of new products, including assays for DCIS, Colon Cancer and one of the first commercially available liquid biopsies.

He served the College of American Pathologists on the Molecular Oncology Committee, with responsibility for proficiency testing in biomarkers for lung cancer in the United States and across the world and as a member of the House of Delegates representing the State of California. He has served on several working groups and committees for the American Medical Association for CPT coding and reimbursement and assessment of new technologies such as next generation sequencing.

Upon graduating from the University of Minnesota Medical School, Dr. Anderson completed residency in Anatomic and Clinical Pathology at Rush University, fellowship in Oncologic Pathology at Fox Chase Cancer Center and post-doctoral training in Molecular Diagnostics at UCSF. He initially worked in private practice, credentialed at 17 various hospitals and surgery centers.

Cholesterol is an essential component of our cells.

It is synthesized by our cells and affected by dietary, lifestyle, and genetic factors.

Unfortunately, cholesterol for doctors can feel like a moving target as different guidelines have different recommendations, new measurements can appear on reports (ie Non-HDL), and it is a constantly evolving topic for research

In this episode, we talk to one of Australia’s foremost expert in Cholesterol, Professor Ken Sikaris.

This podcast is eligible for 1 RACGP CPD point – self reporting.

KEN trained in science then medicine at Melbourne university before becoming a pathologist in 1992. He worked for several years at St Vincent’s hospital in Melbourne including running a specialist lipid/cholesterol laboratory performing research as well as seeing hundreds of patients in the lipid/cholesterol clinic.

Since then he has worked in private pathology and currently in his job as chemical pathology director he supervises testing on thousands of patients each day – including thousands of cholesterol tests. He is well known internationally in the fields of pathology Quality and how we define the decision limits we use to interpret blood tests.

Ken has several YouTube’s on the low carb down under site (with a total of over half a million views) and some may have seen him as Professor Blood in the Australian documentary ‘That Sugar Film’.

“I die before my time, killed by the Englisholigarchyand its hired assassins.”

These are the words of Napoleon Bonaparte dictated in his last will and testament on his death bed.

Napoleon is undoubtedly one of the world’s greatest Generals.

During his life, France become a global power. The man responsible for the Napoleonic wars and had previously escaped exile before, was captured again following the defeat at the Battle of Waterloo and exiled a second time to the island of St Helena in the Pacific.

The official cause of death concluded by an autopsy was stomach cancer.

However, his death is surrounded by controversy.

In this episode we discuss the life & death of Napoleon Bonaparte, gastric cancer and some of the conspiracy theories surrounding the Great General’s demise.

Multiple Endocrine Neoplasia is a difficult diagnosis for patients, families, and clinicians.

The vast array of symptoms, affected organs, and complex genetics often mean that it can take years (if not longer) for it to be diagnosed. In addition, the impact for the patient is significant as it is a familial disease that is autosomal dominant with very high penetrance.

These syndromes were only identified around the 1960s. However, clinical suspicions were unable to be confirmed as the molecular/genetic techniques only in its infancy. It is a rare condition but one that is critical to recognise early to ensure we provide the best care and management for patients and their families.

Special Guest
Mark A. Lewis, MD, is director of gastrointestinal oncology at Intermountain Healthcare in Utah. Specializing in cancers of the gastrointestinal tract and accessory organs, his interests focus on hereditary cancer syndromes and young-onset cancers, shared decision-making, and patient-physician communication.

The death of his father not only took a huge emotional toll on Lewis, but also piqued his intellectual curiosity. Lewis’ paternal uncle and grandfather both died of rare cancer types and then Lewis was diagnosed with a suspicious symptom himself – hypercalcemia, or high levels of calcium – something his father had also experienced.

As Lewis completed his medical training and established his current position as a haematologist/oncologist at Intermountain Healthcare in Utah, his PNETs were serially monitored. After the dominant PNET changed, crossing a threshold of concern, he had surgery and has documented the experience. Lewis had another special person in mind though and says, “I wanted my son, who has inherited MEN1 from me and may one day require pancreatic surgery himself, to have a record of my own operation.”

Quote: “Pancreatic cancer need not be viewed as a death sentence.” 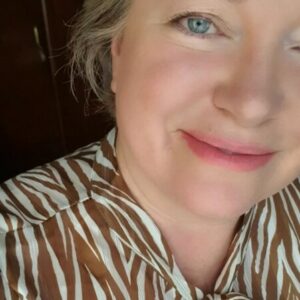 Dena George, MD posted a new podcast episode, Ep #173 – Reflections On Who We Are Called To Be 14 hours ago

Tjasa Zajc posted a new podcast episode, Healthcare Data Series 1/4: How is Komodo Health Gathering and Analysing Health Data of the Whole US Population? a day ago

Please confirm you want to block this member.

You will no longer be able to:

Please note: This action will also remove this member from your connections and send a report to the site admin. Please allow a few minutes for this process to complete.

You have already reported this .

Please login or register to continue.